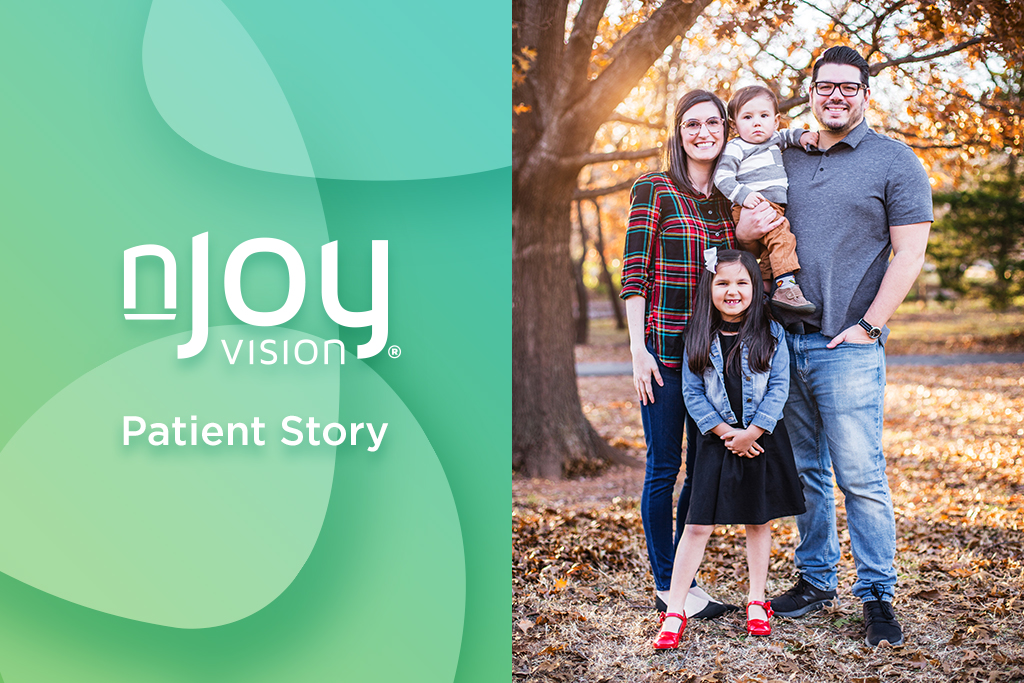 Aaron Dickey is a 37-year-old husband, father, and small business owner in Oklahoma City. To say his vision plays a vital role in his day-to-day life is an understatement but, for as long as he can remember, his has been pretty terrible.

Despite being legally blind without glasses or contact lenses, he would refuse to wear them when playing sports as a youngster. Needless to say, his career in sports didn’t pan out. Surprisingly, he set his sights on another career that requires exceptional vision and attention to detail—graphic design.

Today, Aaron is an award-winning graphic designer despite his lifelong vision problems. In fact, one of his favorite personal creations is the nJoy Vision logo, which, ironically, he designed years before finally getting LASIK.

So after nearly 30 years of living life behind a pair of glasses, Aaron decided it was time to take control of his vision and create a brand new identity.

Following his recent successful LASIK procedure at nJoy Vision, we sat down with Aaron to hear all about his journey to amazing vision.

If you’re like Aaron and have been considering LASIK for years, take it from him, there has never been a better time to change the way you see the world!

What is your name and when did you have LASIK?

What is your profession and what role does vision play in your job and/or day-to-day life?

I’m the co-founder and designer of Unknown.Studio, a full-service advertising studio in Oklahoma City. I design everything from logos to billboards to websites.

Vision is everything in my profession. I’m a very technical graphic designer so my layouts are pixel-precise and built with intention. Personal perception plays a role in my color selections so my vision definitely affects the contrast and clarity between hues and palettes.

For the most part, graphic design work is a sedentary job, so when I do get up and move around, I prefer not to run into any walls. Kidding… kinda.

Lastly, I also do a fair amount of photography, and glasses are a huge hindrance when you’re trying to look through a camera’s viewfinder.

How long had you been considering LASIK and why did you decide to do it now?

I’ve considered LASIK since I was in college. My dad and older sister have both had LASIK and their vision was on par with mine (I think the clinical term is “terrible”).

Once I saw how it changed their lives, I always felt I would make the leap at some point. And I guess that time was now! Finally.

The decision to leap into LASIK was a no-brainer but I had some fears and a lot of questions.

What outweighed all these hesitations was having a 3-year-old son that sees me as nothing more than a jungle gym. So whatever concerns you might have about LASIK completely vanish when a 35-pound human cannonball shoots from the armrest of the couch right into your fashionable Buddy Holly glasses multiple times a day.

What am I supposed to do, tell him no? Of course not. The only solution was to get rid of my glasses.

Are you satisfied with the results of your LASIK procedure?

I’m extremely satisfied with my LASIK procedure and would recommend nJoy Vision to anyone!

Take us through the LASIK process at nJoy Vision, including the consultation, procedure, and next-day follow-up appointment.

My journey with nJoy Vision actually started when I received a free consultation in 2014.

At that time, I wasn’t fully ready and couldn’t get over some of my concerns. Let’s just say I can’t even talk about surgical procedures without getting queasy, let alone having one. But as I mentioned already, some things in life that are just more important than my own personal aversions.

After receiving another consultation in 2021, they informed me I was still a great candidate for LASIK and my LASIK journey officially began!

On my procedure day, I received some complimentary (and completely optional) medication to help ease any anxiety I might experience. An nJoy team member came in to check on me and told me an extremely funny joke. The meds were working marvelously.

After I was escorted into the procedure room, I was amazed at how Dr. Britton explained every single step in the process to me. It made me feel really comfortable and all I could think about was how incredible this technology is and how grateful I felt to experience it (the meds were definitely still working).

Coming from someone who has to look away to receive a flu shot, one of my big hang-ups was that it’s impossible to look away from LASIK. But now, I appreciate every part of being able to witness such an experience.

After years of being considered legally blind and never being able to even read the top line on an eye chart, I was almost brought to tears the moment I realized I could read the 20/20 line.

Tell us about the first time you realized you had bad vision?

The first time I realized I had bad vision was in 3rd grade when my teacher talked with my mom about having to move my desk to the front because I was squinting when she wrote on the chalkboard. Until then, I just assumed that’s how everyone’s vision was.

Even at the front of the classroom I still squinted!

The funny thing is, after I got glasses that greatly improved my vision, I would still forget them from time-to-time and run around the whole day not being able to see.

How did your vision impact your life as a child, as a teenager, and as an adult?

As a child the biggest impact of my poor vision was in sports. Imagine trying to hit a baseball when legally blind and refusing to wear glasses during games.

As a teenager, glasses and contact lenses were something I learned to deal with.

But as an adult, I gave up on contacts and glasses became part of my identity. So much so, I was worried I would lose part of myself if my glasses went away. Now it feels more like Stockholm Syndrome. I had developed a bond with the very thing that was holding me hostage!

What was your least favorite thing about wearing glasses and contact lenses?

By far, my least favorite thing about wearing glasses was the constant need to clean them. I always had a microfiber cloth within reach, and with kids climbing all over me, the need to clean them grew to unmanageable levels.

What are you most looking forward to doing or experience without glasses or contacts?

Surprisingly, being able to see clearly wasn’t as impactful as I expected. Nothing compares to unaided clear vision but, before, I could throw on a pair of glasses and experience good vision.

The best experiences since having LASIK are the smaller ones that most people take for granted. Every now and then, one of these instances comes up and it makes me appreciate where I am now.

The first that felt new and different was standing outside in the rain. No more raindrops on the lenses blurring my vision. No more cleaning the lenses after. That one made me smile.

I’m also still having a funny problem of adjusting or reaching for glasses that are no longer on my face. I also saw my hair getting cut for the first time in over a decade. That one was bizarre.

What is the biggest difference in your life now compared to before you had LASIK?

Although at one point I avoided glasses and wore contact lenses, I was never a responsible contacts wearer. I would sleep in daily lenses for weeks until my eyes got bloodshot. As a result, I grew tired of the constant irritation and went full-time coke-bottle glasses.

So, the biggest difference in my life now compared to before I had LASIK is best answered by the renowned designer, Dieter Rams: “Good design is as little design as possible. Less, but better.”

That’s it. The best design is invisible. Something that provides great value in which people often overlook and take for granted because it makes life easy.

Would you recommend LASIK at nJoy Vision to your friends and family?

I would wholeheartedly recommend LASIK or any other laser vision procedure at nJoy Vision to my friends, family, and even strangers.

nJoy Vision has given me one of the greatest gifts I’ll ever receive, and it will last a lifetime.

Anything else you’d like to add to this interview?

I should probably get some new family pics taken because there isn’t a professional photo of me in existence where I’m not wearing glasses.