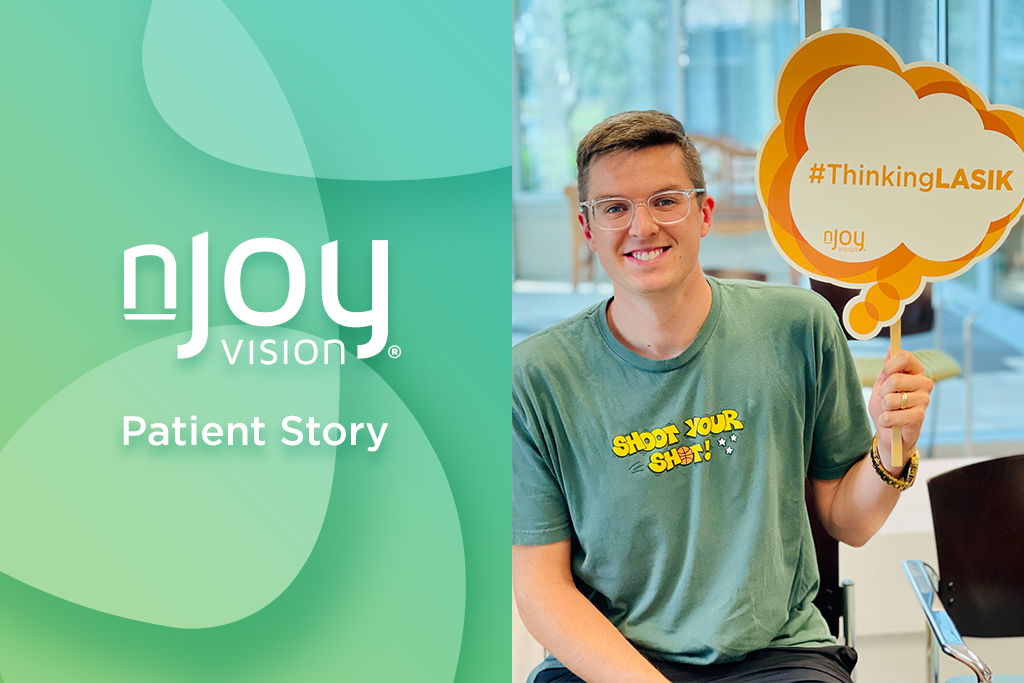 Chisholm Holland is a sports media professional and the producer/co-host of The Triple M Ranch, a sports talk radio show on 107.7 The Franchise in Oklahoma City.

The 28-year-old Marlow, OK native and University of Central Oklahoma grad is an avid sports fan and supporter of all things local. He’s also a bit of a bear-poker, which comes in handy when he’s sitting next to his bigger, grumpier radio show counterpart, Sam Mayes.

You can catch Chisholm’s sports insights and bear-poking antics weekday afternoons from 3:00-6:00 pm on 107.7 FM in Oklahoma City.

What is your name and when did you have LASIK?

What is your profession and what role does vision play in your job and/or day-to-day life?

I am a member of the sports media. I mostly spend time covering college football and basketball.

My vision is one of the most important parts of my job, and little did I realize how much it was letting me down! I can’t explain how much of a life-changer LASIK at nJoy Vision has been.

Now, when I’m sitting in the press box at a sporting event, I no longer have to lean over and say, “Hey, what jersey number made that tackle?” There’s no more squinting for hours on a Saturday until the point I have to leave with a headache. No squinting, no second-guessing what I am seeing. I finally get to enjoy the job I love without any hindrance!

How long had you been considering LASIK and why did you decide to do it now?

I picked up glasses in 6th grade, which is obviously not the coolest age to get them. Much to the dismay of my parents, I used to get to school and immediately take them off and shove them in my pocket.

I would go the whole day not being able to see the whiteboard. I’d play tackle football at recess and talk to my friends with those new Nike glasses in my pocket out of complete fear of what my friends would think.

Finally, after bending my new glasses beyond the point of recognition, my parents got me contacts. Which obviously was better, but I knew from that moment that as soon as I could get LASIK, I was going to have to pull the trigger on it. It’s just too much of a hassle to constantly have to deal with glasses or contact lenses.

Are you satisfied with the results of your LASIK procedure?

Satisfied is an understatement. I am blown away. I have told the story of my procedure more times than I can count. How could you not?

Initially, I was terrified of what I assumed the process would entail. I didn’t know if I could sit still for hours… what if I blinked… what if I sneezed?! But after talking with nJoy and their staff, I realized none of those concerns were valid. It suddenly was just a question of what will it be like after.

I can tell you I never thought the day after my surgery I would be able to go to WORK! It was so simple and the recovery time was almost immediate! The last few weeks since my surgery have been some of the best and most shocking of my life because of how perfect my eyes and vision feel now!

Take us through the LASIK process at nJoy Vision, including the consultation, procedure, and next-day follow-up appointment.

nJoy’s staff is so great. I am an over-talker when I am nervous and I think they could tell. They allowed me to ask all my questions and really told me everything I needed to know. It’s amazing how quickly I felt comfortable going into the surgery.

I didn’t really have any worry or fear on the day of, but, again, nJoy knocked my expectations out of the park. They told me to expect to be in the back for 30-45 minutes. I was completely unaware that 95% of that time was actually just sitting and waiting on the eye-numbing drops and relaxant medication to kick in.

The surgery was so quick and so efficient. I couldn’t believe it once it was over. After sleeping most of the day, I woke up the next morning, and, for the first time, I was able to open my eyes and see out the French doors overlooking my backyard. I can’t explain that feeling.

Tell us about the first time you realized you had bad vision?

Like most kids in small-town Oklahoma, I played high school sports. I had always worn contacts and never really had any issues… Until I got poked in the eye during a basketball game my senior year and lost a contact lens.

I didn’t think much of it at first, but, when I stood up and continued playing, I how useless I was without my contacts. I anticipated that shooting or looking down the floor might require a little extra effort or concentration, but it felt like I was a 3rd-grade kid trying to compete with a lineup full of Blake Griffins. I was so used to my corrected vision that suddenly having to play with my natural eyesight hit me like a ton of bricks.

After that game, I remember sitting on the bus thinking I would need to carry an extra pair of contacts on me for the rest of my life because I can’t function without them.

How did your vision impact your life as a child, as a teenager, and as an adult?

Most of the time, it didn’t, to be honest. When I was younger, I just thought wearing glasses and contacts was normal. It wasn’t until I got older that I began to realize how much of a hassle they were.

For one, I had to start paying for them on my own. That’s no fun. And there’s nothing like getting ready for bed and remembering you were supposed to pick up solution on your way home from work. You’re just standing there, staring at yourself in the mirror trying to decide if you should throw away this perfectly good, expensive pair of contacts or get dressed and run to Walmart. Let’s just say I’ve thrown away more money than I care to admit.

Looking back, I don’t miss those days; they always created some sort of inconvenience. Like going on a trip and opening up your suitcase to realize you forgot to pack a contacts case. Or accidentally taking a nap with your contacts in and waking up to heavy, scratchy, hazy eyes. I am so glad those days are behind me.

What was your least favorite thing about wearing glasses and contact lenses?

Glasses were always out for me. I don’t understand how people live normal lives with them. They slide down your nose. You constantly have to clean them. You can’t do ANYTHING in glasses!

I am a runner, but running in my glasses was impossible. I’ve never appreciated being able to go out and run more than I did during the weeks leading up to my surgery when I wasn’t allowed to wear contacts. I couldn’t play basketball with my friends, either, because they were always falling off my face. I can’t explain how happy I am that I won’t ever have to consider that ever again.

What are you most looking forward to doing or experiencing without glasses or contacts?

What is the biggest difference in your life now compared to before you had LASIK?

To me, the thing that has stuck out the most is just how quickly it felt natural. I honestly don’t even think about it. People told me that for months I would still get up to go take out my contacts before bed. That hasn’t been the case for me. It feels like this is how I have lived all my 28 years. My body and mind immediately bought in, like, “Yeah, dummy, this is how it’s supposed to be!”

Would you recommend LASIK at nJoy Vision to your friends and family?

Of course! I have been telling anyone who will listen that it’s more than worth your time and money. You simply cannot fathom the freedom it gives you until you experience it for yourself.

​​Is there anything else you’d like to add to this interview?

I can’t tell you how much I have enjoyed your entire staff. From front desk staff to the surgery team, nJoy Vision has provided some of the best “customer service” I have ever experienced.