Going Behind the Wink 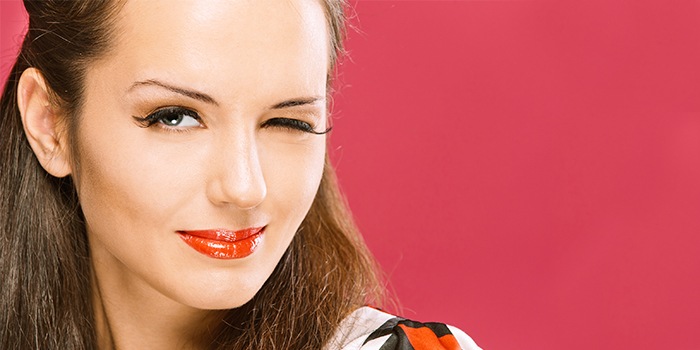 There is a subtle form of communication we all know about, and some of us have even mastered, but do you really even know where it began or what it actually means?

The form of communication we’re speaking of is the wink , a non-verbal communication tool that can be used to deliver or exchange any number of messages.

A proper wink usually involves eye contact between at least two individuals. The winker simply closes and opens one eye when he has the attention of the intended recipient, thus delivering a covert and implied message.

At some point in our lives, we’ve all been winked at and/or delivered one of our own. Depending on the situation, the context changes with the bat of every eye. Which begs the question, what is the proper use of a wink, and where did it come from?

Although the exact origin of the wink is unclear, we’ve dug long and hard to find the true meanings behind this subtle gesture.

While you may be aware of all the different messages that can be conveyed by winking, it’s important to note that signals are easily crossed. So let’s take a look at a few of the gesture’s most common connotations, that way you know what you’re getting yourself into should you attempt to master the art of winking.

Sometimes when you are not able to wave or offer a verbal hello, a quick wink can do the trick. It’s a simple acknowledgement that you’re aware of another’s presence. In instances where formal salutations are unfeasible, a wink ensures that no one gets a disheartening cold shoulder.

The flirtatious wink is the most frequently attempted wink, and is therefore the most abused. It’s meaning can range from “I find you pleasing to thine eye.” to “Hey, baby. Let’s get out of here.“ Discretion is of the utmost importance when executing a flirty wink.

From inside jokes to well-kept secrets, this particular wink is very popular. Ideally, it happens so quickly and discreetly that only those “in the know” pick up on it. The danger is that an unintended recipient might witness the gesture. This could make them feel left out, or suspect they’re the butt of the joke.

When a joke goes horribly awry, or slides towards the offensive side of things, this wink helps minimize the damage. People even relay this message via text by using a semicolon and closed parenthesis – ;). It simply means “Haha, totally kidding. Obviously.”

Involuntary twitching isn’t actually a type of wink, but it is responsible for a large amount of wink faux pas. Ill-timed eyelid spasms are easily misconstrued as flirtatious or salutatious winks. Even worse, they make the blundering blinker look like an unskilled winker.

But on a more serious note, eye twitches could be caused by an underlying neurological condition. See a doctor if you experience prolonged twitching. And if you’d like to learn more about the common causes of eye twitches, check out this recent blog post.

The bottom line is that this simple facial expression can signify just about anything, as long as it’s shared amongst two or more people operating on the same winking wavelength.